Five years before the nWo changed wrestling, Scott Hall and Kevin Nash teamed up under their respective guises of the Diamond Studd and Oz to take on Big Josh and Tom Zenk. 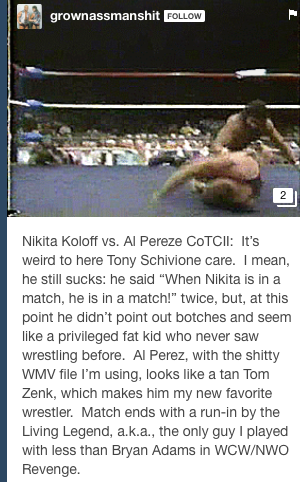 Posted by rasslinfan at 9:02 PM No comments: 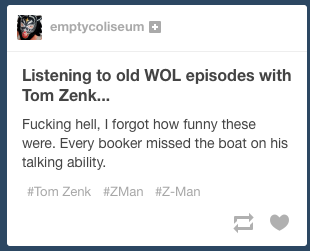 Posted by rasslinfan at 6:53 PM No comments:

I recently fell down the rabbit hole of Tom Zenk’s career after the 4CRetro podcast episode of Wrestle War ’92 when Zenk matched up with Brian Pillman. A phenomenal Light Heavyweight Title bout that made me wonder: what the hell ever happened to this man? 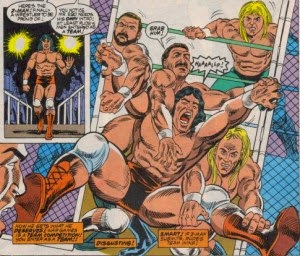 That tyrant behind the book, Ole Anderson, has finally gone too far, the no good bastard. In no uncertain terms, his reign as the holder of WCW’s book has been nothing less than a total, complete, undisputed disaster. The company has lost nearly seven million dollars, stars of yesteryear are getting the main event pushes, and worst of all, the Z-Man has been relegated to being the Zero Man. (Fuck you, Johnny B. Badd!) 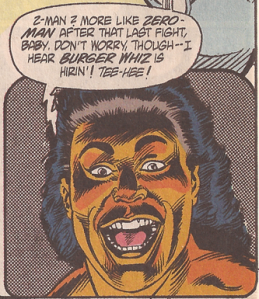 “The one thing I’m grateful to him (Rick Martel) for is his warning about Dusty Rhodes. He told me how egotistical these @#*!!s were. He said he’d never go back any place where he’d have to kiss Dusty’s ass.”
“Stan (Hansen) is like Ole Anderson. ‘F**** the pretty boys!'”

Anderson and Rhodes become key players in this stagnant year of 1990 NWA/WCW. The Z-Man, Tom Zenk, like many young stars is cast to B Shows while the likes of Hansen and Paul Orndorff, certainly in the downhill slope of their careers, get the thrust into the lethargic A Shows which most fans are turning their back to with money in hand for better wrestling (ie. the B Shows).

There were bright times prior to this changing of the guard that brought the out-of-touch Anderson into the role of WCW match maker. Before him, it was the Nature Boy himself in that role, which helped bring about one of the more memorable tag team feuds of this short time: Zenk and Flyin’ Brian Pillman battling Jim Cornette’s Midnight Express with the US Tag Team titles hanging in the balance.

Meltzer’s ratings don’t lie, ranging from three to four stars with live reports consistently notating the pops for the hot tag. That’s the mark of a good tag match. Keep the gimmicks and cheap heat. A good hot tag is the ultimate trump card. Zenk and Pillman along with the Midnights perfect this for most of 1990. The Anderson ascension in the booking role slows burgeoning and thriving feuds like this to a dead calm. Zenk’s ascention in professional wrestling comes in a line and crew of Minnesota stars of the squared circle. With the likes of Hening, Rude, Koloff, even Darsow, Zenk, combined with his impressive physique followed his high school brethren to wrestling. It’s a journey that sees many avenues for Zenk. Japan, the WWE, the AWA, but it’s in the NWA just before the WCW name-takeover, would he cement himself as the Z-Man.

The pairing of Zenk and Pillman is a no-brainer. Their styles, crisp technical mat wrestling combined with an impressive aerial attack, are just what the fading NWA needs to create the national pop for the new WCW product. Ole Anderson disagrees…

The dog days of summer. Zenk is fed to the new giant on the block, the imposing Big Van Vader. In fact, he’s fed to Vader multiple times throughout a lot of 1990, and when he’s not eating a pin from Vader, it’s Stan Hansen and even Kevin Nash disguised as Master Blaster Steele.

Excerpt from Wrestling Observer Newsletter 10/9/90: “Master Blaster Steele pinned Tom Zenk in two minutes. Basically it appears they are trying to get Zenk to quit and he hasn’t yet so they are turning up the pressure.”

Seasoning in Japan
Zenk and Hiroshi Wajima go toe-to-toe in the finals of a tag team tournament in famous Budokan Hall.

Zenk tags with veteran Rick Martel; the Can-Am Connection. They become instant draws with the Japanese fans. And how could they not? High octane offense combined with stiff exchanges with Japanese icons such as Wajima and Giant Baba cater to the action expected in the east. They become such a draw, they are offered a sizable sum to stay in Japan and work in the vein of future Gaijins of the squared circle, Hansen and Vader.

But a curious development. Martel urges Zenk to hold out for more money with Vince McMahon and the WWE. They venture back to the west. 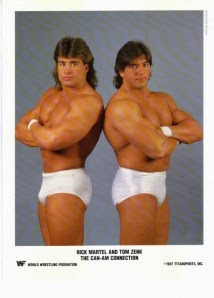 The young high fliers with the look and flair younger fans in America can gravitate towards get hot quickly in 1987. They match up with Islanders and the combination of Volkoff and Sheik and soon find themselves fantasy booked with the championship wearing Hart Foundation, which seemed destined to be the third mantle of the all-ready hyped WrestleMania III card (along side Hogan-Andre and Savage-Steamboat).

But legal issues with Jim Neidhart put the Pontiac payoff in jeopardy and the Can-Am duo draw Bob Orton and Don Muraco in the opener; a five and a half minute opener. Solid. Nothing offensive. Crowd is into it as they should be. There’s very little rest, and it’s a match strictly designed to let Zenk and Martel get their stuff in, get over with the crowd, and set up for the inevitable tag title bestowment that seems all but guaranteed after ‘Mania. But then…

“He (Martel) was making $6,000 a week in Japan while I was making $2,500 as his partner. He was playing me with the promoters as in ‘I’ve got this kid…’ I played the part of the lesser guy with no ego…I never managed to get high self-esteem from the money in WWF. We were over like kings on Earth. People came up to us at airports-businessmen, everyone. Great push but no money!…

Ultimately it was Rick, with his greed, who split the Can-Am Connection.”

A curious twist.
Despite a badass clash of work rate between the Harts and the Can-Ams, the pay-off title change never happens. Zenk leaves WWE suddenly and abruptly amidst money disputes stemming from alleged shady dealings with Martel and the company that caused Martel to get paid substantially more than Zenk. (There’s also some alleged dialogue during Zenk’s departure that includes a curious conversation with Linda McMahon where he threatens to blow the lid on the steroid scandal and Dr. Zahorian which leads to an ambiguous threat from the side of WWE.)

Zenk on the move…
Tom Zenk, a good looking, well conditioned, extremely capable and as over a wrestler with the fans as anyone in the mid-card of NWA is Ole Anderson’s glorified jobber of the stars. Cast in the cellar of mediocrity on B Shows outdrawing A Shows that act more as wrestling museums for the stars of yesteryear. It’s a dark time for the Z-Man.

But there’s a coup in the works. Anderson is swiftly removed amidst the economic downturn the company has taken and replaced by a committee that includes Jim Ross, Tony Schiavone, and Flair who kickstart a new, unbelievable trend to push this world traveler of Japan, AWA, and WWE, who again has all the tools along with a decent promo to be a mainstay of the mid-card.
…

Less than a thousand gather at the Center Stage Theater in Atlanta. December 4th television taping. Tom Zenk, the Z-Man is introduced first followed by the slow, methodical entrance of his opponent, the NWA World Television Champion, Arn Anderson. In many minds, the greatest of all TV Champions.

As far as a title goes, none is better suited to draw heat from the crowd on behalf of a heel champion than the TV Title. With a time limit of usually 15 or 20 minutes, inevitably a broadway would end the match just as the babyface was closing in on a victory. Anderson is classic in this role; milking matches with snug mat work, working a hold for most of the duration. This is a perfect contrast to the highflier Zenk.

Zenk’s build is fairly strong, coming in with somewhere between 30 and 40 consecutive victories; a hot babyface. But with Double A, the mega heel, Zenk becomes a face in peril with Anderson keeping him on mat, wrenched in an arm bar. (At one point, Anderson becomes so annoyed with a bandage hanging loose from his head he viciously rips it away while re-applying an arm bar.)

The final five minutes becomes a furious rally that ends with an unlikely bursting, fading missile dropkick that upends Anderson cleanly. Tom Zenk, after all the false starts from all panels of the world, is a singles champion on the national stage. A red hot babyface who simultaneously became the last NWA Television Champion and the first under the banner of WCW.

He’d lose the belt in a month.

Nice while it lasted. 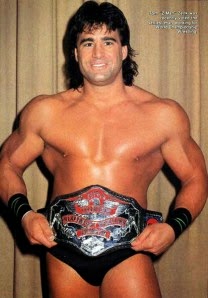 The picaresque journey of Tom Zenk throughout the 80’s and early 90’s is a mid-card tragedy in wrestling that wasn’t the first and certainly not the last. I recently fell down the rabbit hole of Zenk’s career after the 4CRetro podcast episode of Wrestle War ’92 when Zenk matched up with Brian Pillman. A phenomenal Light Heavyweight Title bout that made me wonder: what the hell ever happened to this man?

Credit right now has to be given to tomzenk.net which is an absolute treasure trove of in-depth information about the Z-Man. A lot of the information in this piece including the quotes comes from this site. I highly recommend it for classic wrestling fans.
I couldn’t help but connect the dots to the product currently under everyone’s bus in the present day WWE.

It made me think of poor Kofi Kingston, my favorite unsung hero in professional wrestling. I have been hanging on to the one beautiful moment in the Garden when Kofi decided to key Randy Orton’s recently gifted stock car and become edgy, culminating in a Boom Drop through a table. Then Orton called him “stupid,” and the push was lost forever.

It has been forever. A seemingly sad hyperbole that has had moments where it might be thwarted but ultimately coated in yet another layer of battle royal non-eliminations.

The thought of Kofi linking up with Big E and Xavier Woods and the possibility of a Nation of Domination rebirth ruffles the feathers of many who still find it a continuation of an often ignored streak of racism in WWE. You can argue that; fine, cool, right on.

If it sticks around, I’m excited. I’m excited at the possibility that Kofi will not only hopefully have an edge (dare say heel tendency) but maybe get above meddling in the jobber of the stars division of 2014. Then again, maybe he’s destined to be the less bitter version of Tom Zenk in 2014. What a sad, sad, terrible world we live in.

Posted by rasslinfan at 3:59 AM No comments:

Zenk on the Net - selections from August/Sept 2014 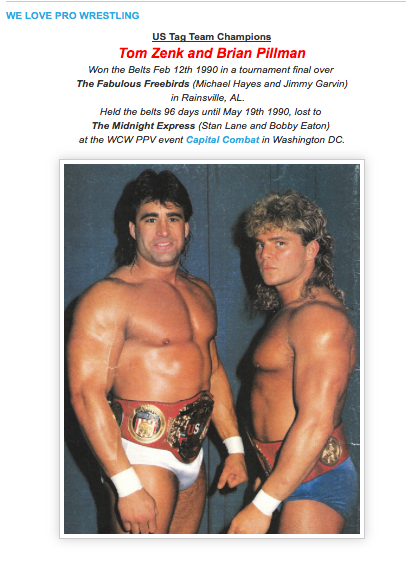 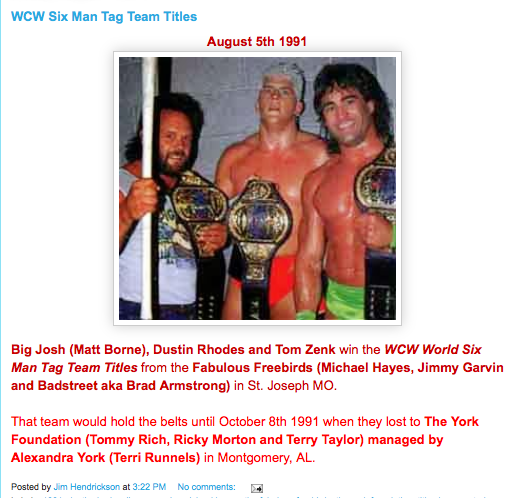 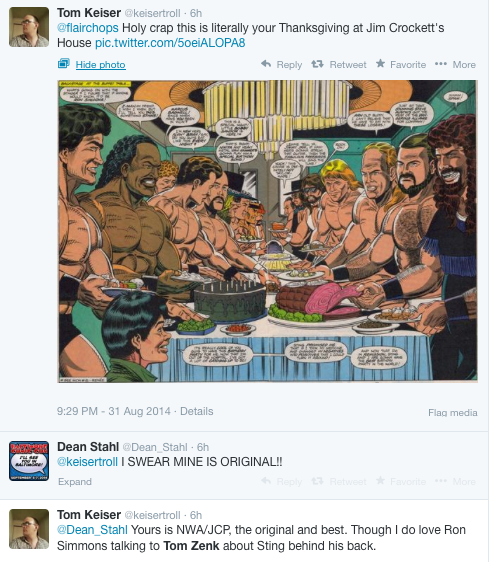 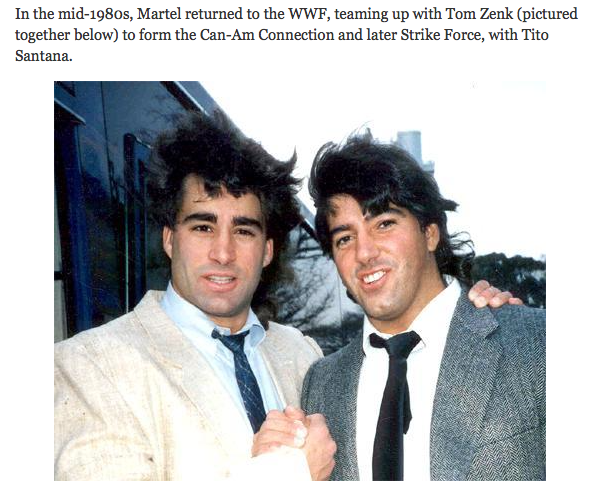 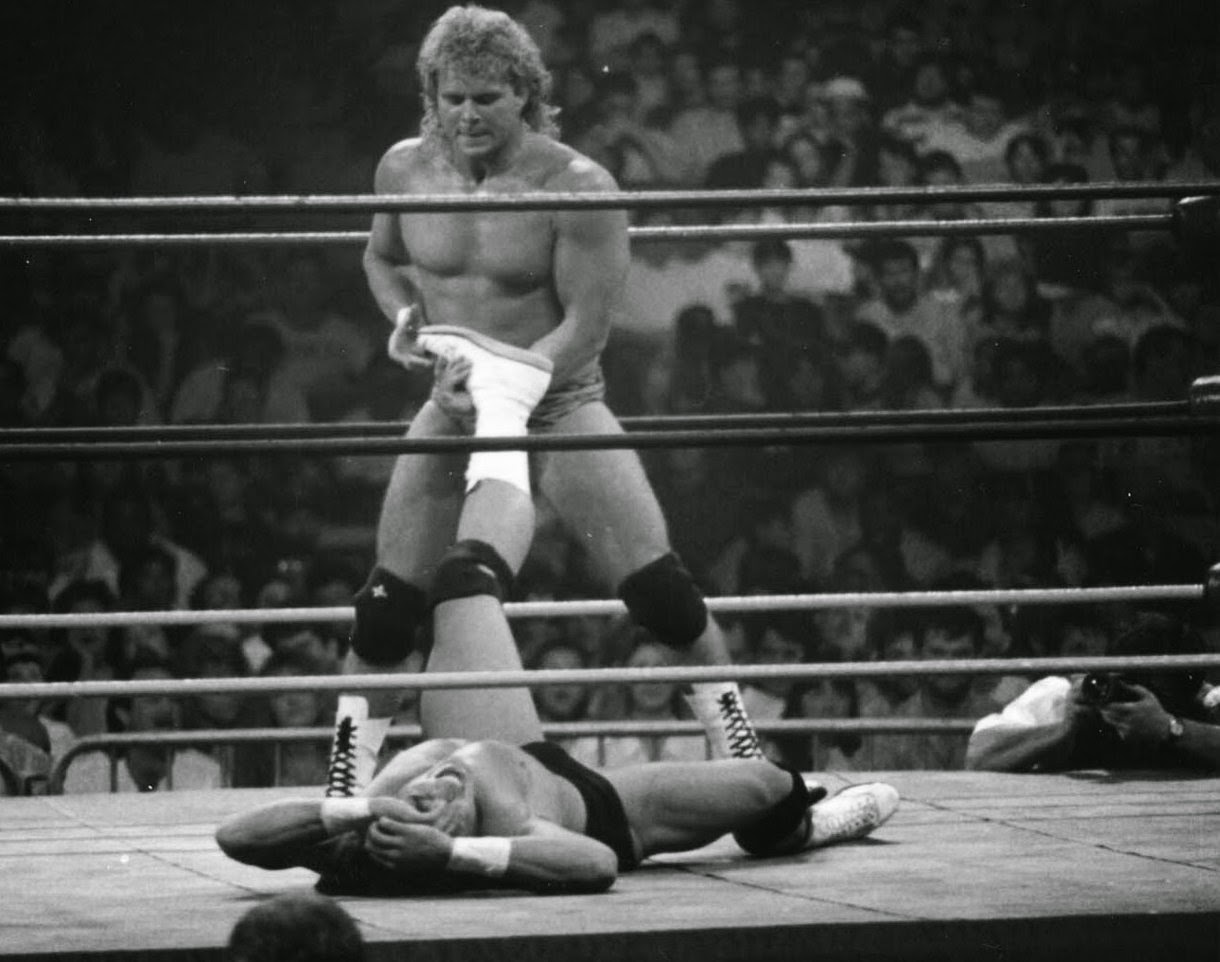 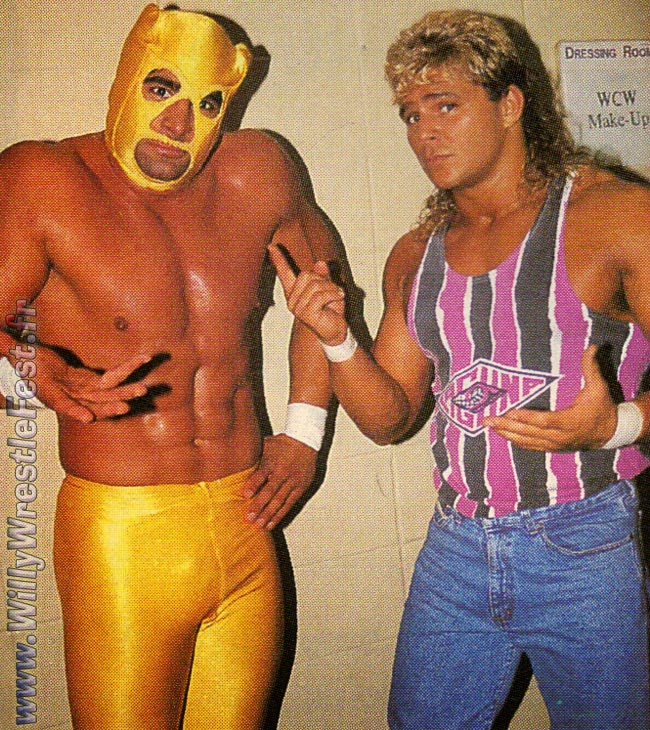 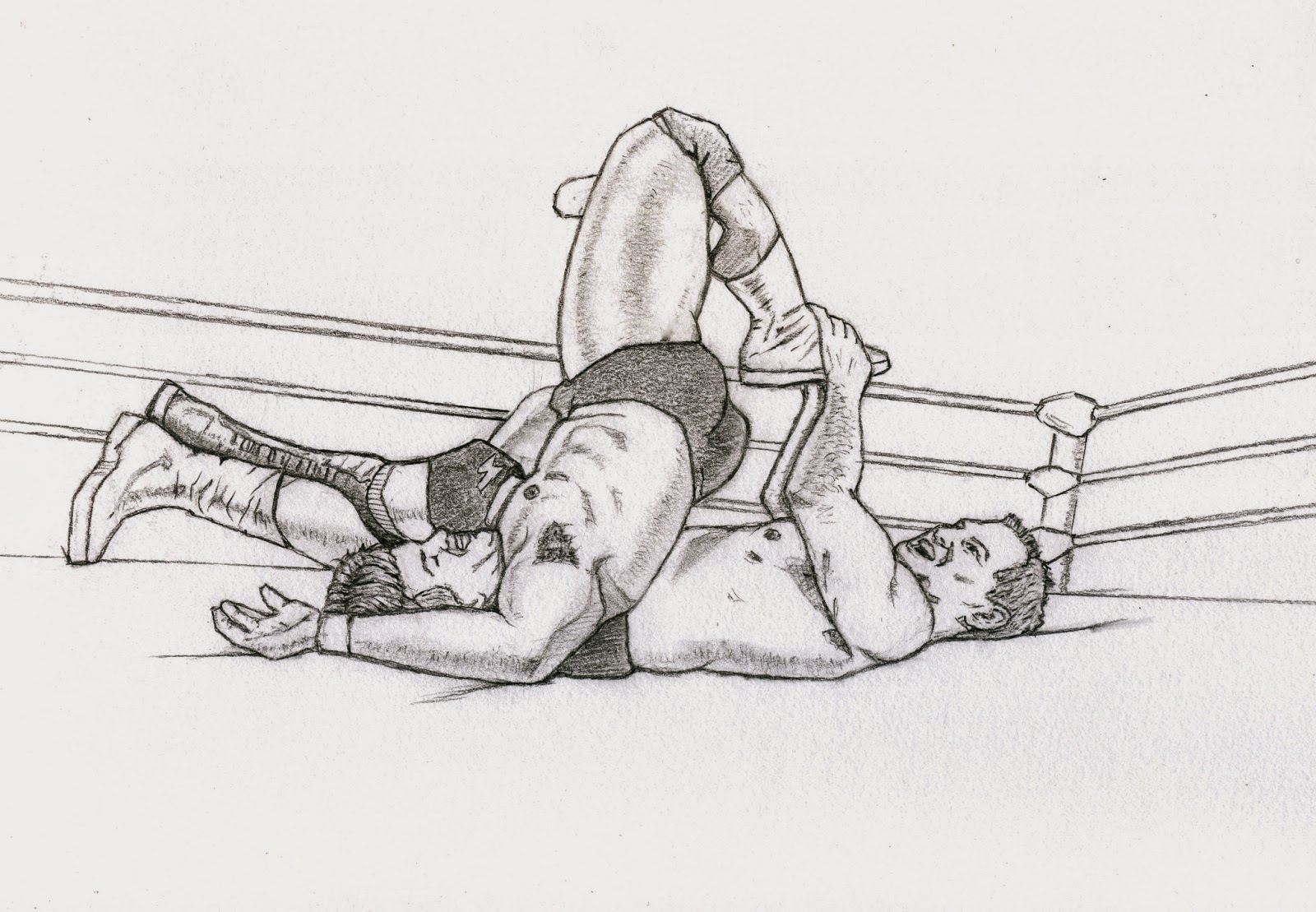 Posted by rasslinfan at 2:48 PM No comments: