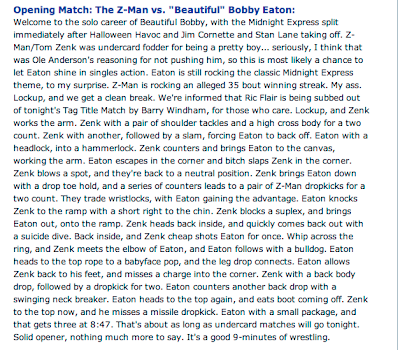 Posted by rasslinfan at 3:18 AM No comments: 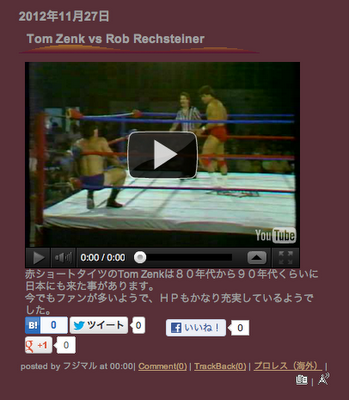 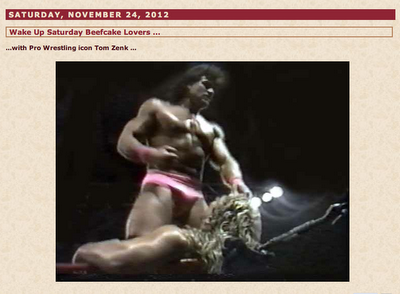 Posted by rasslinfan at 3:14 AM No comments: 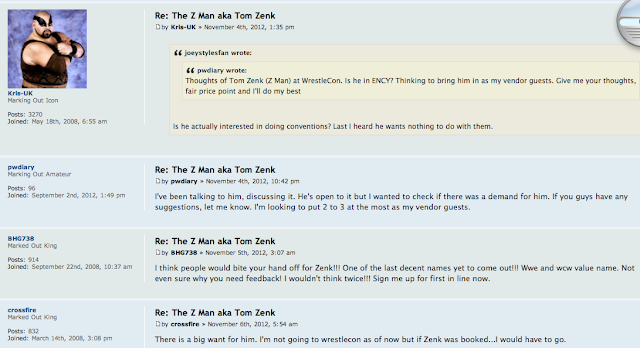 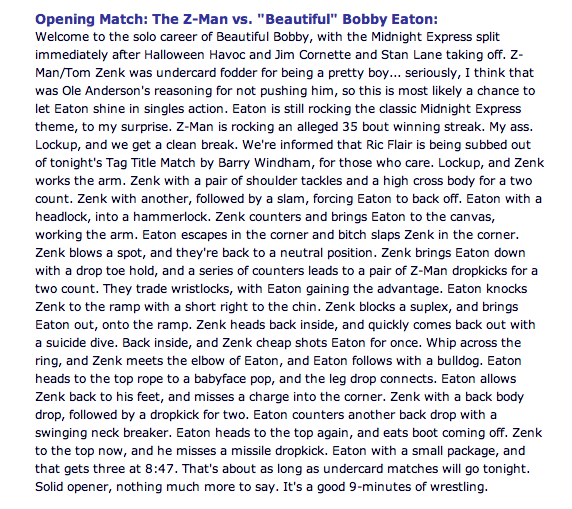 FROM WWE.COM  TRIBUTE TO BRAD ARMSTRONG 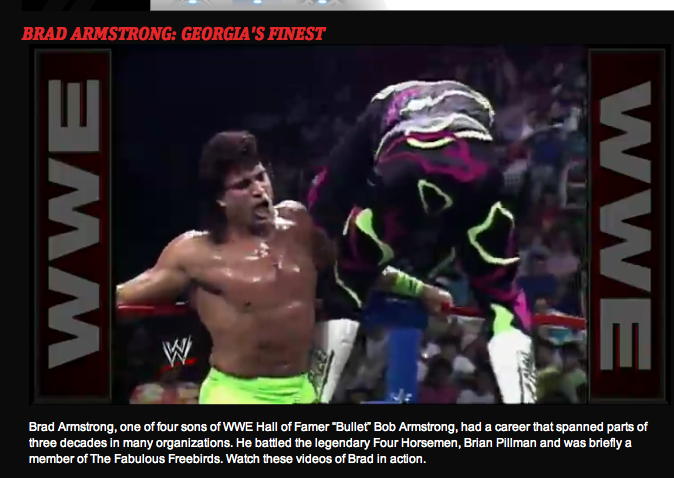 Posted by rasslinfan at 12:53 AM No comments: 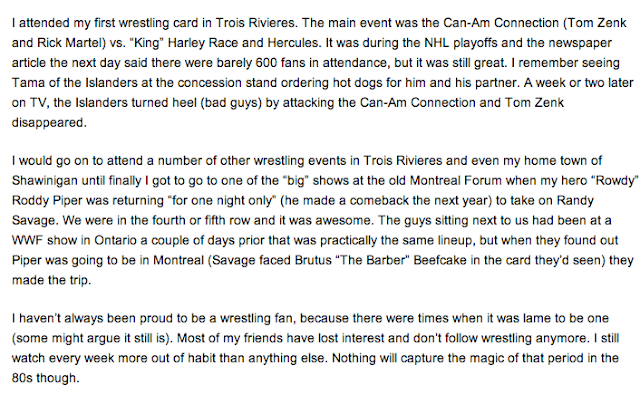 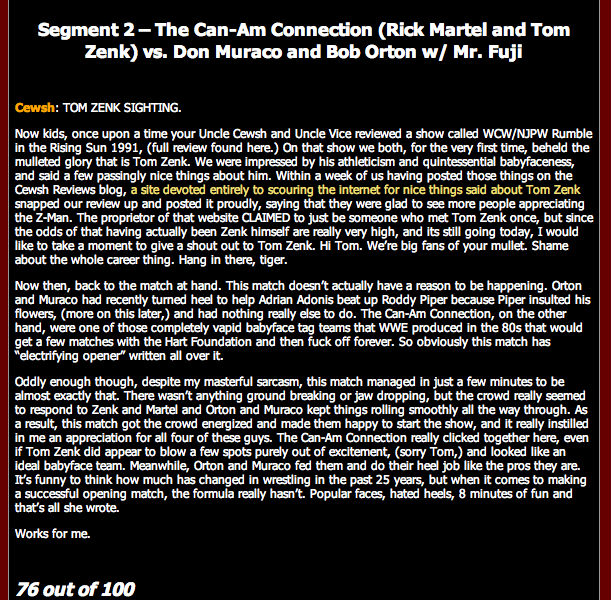 Posted by rasslinfan at 12:46 AM No comments:

Posted by rasslinfan at 6:08 PM No comments:

RIP TO A SMOOTH WORKER AND GENTLE MAN

Our 2005 Interview with Brad Armstrong - here 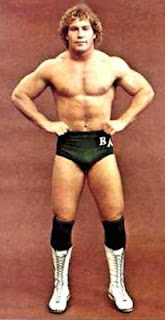 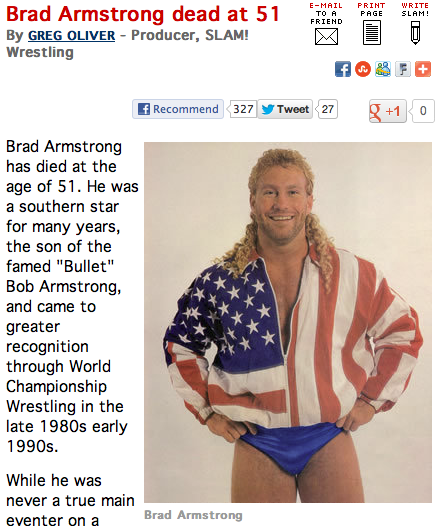 national scale, with most of his success coming in territories like Georgia and Continental, he was beloved in the industry and respected as one of the greatest talents.
"Brad Armstrong could work with anybody. That guy was as smooth as silk," wrote Steve Austin in his autobiography,The Stone Cold Truth. "He was like Ricky Steamboat, in a way -- another guy you went out there with and never had to say a word to. He knew the finish and how to get there. I knew how good he could be. I'd call all the spots in the ring and we'd just wrestle."
Dusty Rhodes, on the Ring of Honor DVD, Secrets of the Ring, talked about putting Armstrong in high positions when Rhodes was the booker in WCW. "Did Brad ever get any big shots? I thought Brad was tremendous, and I still do to this time. I felt very comfortable putting him in a main event," said Rhodes. "Brad Armstrong didn't want to stay mediocre. He wanted to be on the top."
"Gutted to hear about Brad Armstrong passing," wroteSteve Corino on Twitter. "Amazing wrestler & even better guy."

A graduate of Wheeler High School in Marietta, Georgia, Robert Bradley James, born June 15, 1961, followed his father into the pro wrestling ring, having grown up around the business.
"I took Brad under my wing at 18 when he started and was 210 pounds," Bob Armstrong told the Ringside Talkradio show in March 2011. "He was a pretty tough character, so I figured he'd do all right with my guidance. Sure enough when he was 19 we won the national [tag team]championships. They had 22 teams from New Zealand, Australia, Japan, South America. They brought them all into the old Omni in Atlanta, and sure enough, we came out on top."
Four of Bob Armstrong's boys would enter pro wrestling -- Brad, Brian (Road Dogg Jesse James, BG James, etc.), Steve, and Scott, who wrestled but is now a WWE referee.
In a March 2011 interview with SLAM! Wrestling, Bob Armstrong talked about what a tight-knit family they were. "We've never really been apart. I've got three sons who live within 45 minutes of me, one within five minutes of me. Brad's the only one that stayed around the Atlanta area; he married a lady from HBO, and her headquarters are up there. But my other three sons are with me all the time. We wrestle together."
According to WWE.com, "Brad saw his physician last week for a medical issue and was found unresponsive this morning."
In an interview with Tom Zenk's website -- Zenk and Brad Armstrong were a tag team in WCW for a while -- Brad Armstrong recalled his first match, Montgomery, Alabama, where another wrestler didn't show up and, having brought his gear, Brad was asked to fill in.
"I was scared to death to wrestle Jerry Brown, of the Hollywood Blondes. This guy is gonna kill me ... in public, I thought. That was the longest walk to the car to get my gear," Brad Armstrong said. "As it turned out, Jerry was one of the best workers in the business. He led the match, and I was astounded by the way he was putting me into holds and getting me out of them to make it look like I was doing it all myself. But, I beat him in the end with a small package. I was terrified, I thought I had screwed up by defeating him. But Dad slid under the ropes and picked me up with a huge hug. It suddenly occurred to me at that moment that this was all a game. I knew I never wanted to do anything else with my life! My mom cried when I told her because she remembered the life Dad had, being gone so much and the temptations out there."
In Georgia Championship Wrestling, Brad and Bob Armstrong teamed up to win the big Thanksgiving tag team tournament at Atlanta's Omni in November 1981, and the territory would be his home base for the next few years. His successes would include tag title runs with his father, his brother, Scott, Terry Allen (later Magnum T.A.) and Tim Horner, as well as Georgia's National Heavyweight title.
Moving west to Mid-South Wrestling, he was a major part of Bill Watts' UWF, an attempt at a national promotion. Other wrestling homes would include Japan, Kansas City, and Continental.
In the UWF and Jim Crockett Promotions (JCP), which was the NWA at that point, he had a fabulous tag team with Tim Horner, The Lightning Express, which battled the likes of the Midnight Express.
As JCP expanded and was eventually bought by Ted Turner and his television company, Brad Armstrong got a chance to shine in many different roles, even if you didn't always recognize him.
In WCW, he was Candyman (handing out candy to kids), Arachnaman (a Spider-Man knockoff that lawyers squashed), and even the mysterious Badstreet, an ally to the Fabulous Freebirds. And don't forget Dos Hombres (a tag team with Ricky Steamboat covered from head to toe in red gear), Fantasia, Freedom Fighter, and near the end of days in WCW, Buzzkill (an old hippie wearing tye-dye shirts).
In 2000, after a TV taping, he was accidentally hit in the parking lot by a couple of other wrestlers, and severely hurt his knee. While WCW did pay for the medical expenses, when his contract came due while he was off injured, it was not renewed.
His last national exposure came in 2006, where he worked for World Wrestling Entertainment's relaunched ECW product. Besides wrestling on TV, he acted as a trainer, producer and, on a couple of occasions, as a guest commentator.
Armstrong took to the stage at the WWE Hall of Fame ceremony at the Philips Arena in Atlanta in April 2011 to induct his father, along with his brothers Scott and Brian.
He is survived by his wife Lori and daughter Jillian.
Posted by rasslinfan at 7:12 PM No comments:

"WCW going belly up wasn't a one man fiasco but a team effort within the ivory towers of the CNN Center from ignorant people who did not respect the product."
I have said this many times, but WCW's biggest problem was that they didn't have anyone "in charge" that knew the business. I am not talking Dusty Rhodes, Kevin Sullivan, etc., as booker, but I am talking someone withing Turner Broadcasting that understood the product.
I have heard that Jim Herd was placed in charge when Ted Turner bought WCW and from all accounts, he was a very nice man. However, he knew nothing about wrestling. He was a TV guy. As someone who knows nothing about TV or how it is produced, I would be the last guy that should be hired to run a TV show. However, the way the WCW was run, I would be the first choice. One of my jobs is that I am charge of the umpires for youth baseball in the spring and summer. I am more than capable of training the umpires myself but I hired several others who work for me to improve the product. While I handled the business portion of the business, they did the training. WCW never got that concept.
In addition, WCW had NO IDEA what to do with talent. NWA Worldwide which eventually evolved into WCW Worldwide started appearing on my local channels in mid to late 1989. When I had better access to NWA/WCW TV, I almost stopped watching the then WWF. The in-ring product was better. However, eventually the up and coming stars like Tom Zenk, Brian Pillman, Brad Armstrong, Shane Douglas, Bobby Eaton, and Steve Austin were stuck in the middle to the bottom of the card and going absolutely nowhere. In addition to them, wrestlers like Chris Beniot, 2 Cold Scorpio, Scotty Flamingo, and even Johnny Gunn (Tom Brandi) were brought in only to almost see their "push" vanish within minutes. Eventually, they were putting over guys like Dick Slater, Greg Valentine, Erik Watts, Vinnie Vegas, Dustin Rhodes, Tex Slazenger, Shanghi Pierce, and Dan Spivey. Problem? The recently mentioned names were either at the end of their careers or extremely green.
As WCW evolved into the WWF Senior Tour in the late 90s, the trend continued. Wrestlers near the twilight of their careers should been used to help create new stars. Instead, the young stars eventually left for the WWF/E and became stars on their own. WCW was left with a bunch of expensive contracts who were told to sit at home while "new stars" were pushed. Those new stars (where the hell is Mike Sanders anyways?) had no "reference" for being a star. Who did they beat? No one other than each other. Instead of using Sting to be "the next leader" of a faction of wrestlers like Ric Flair, they sent him home and he only appeared once or twice over the last year. Soon they became a joke and long-time fans such as myself had shut off the TV and had found better things to do.
Posted by rasslinfan at 1:08 AM No comments: