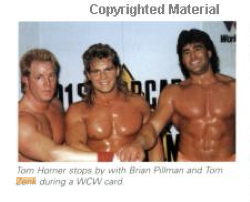 from The Encyclopedia of Professional Wrestling: 1… (Paperback)
by Kristian Pope, Ray Whebbe

Posted by rasslinfan at 3:22 AM No comments:

Posted by rasslinfan at 4:09 AM No comments: 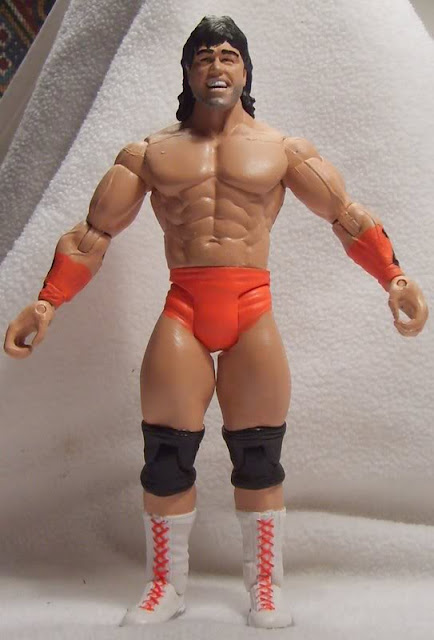 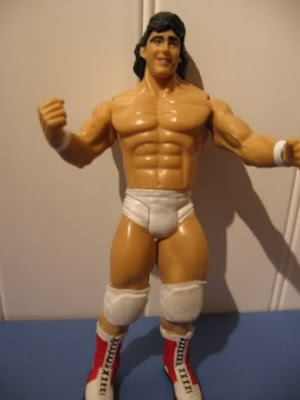 Posted by rasslinfan at 4:14 PM No comments:

We continue our week-long tribute to Brian Pillman on the week of his birth with a WCW United States Tag Team Title bout from an early-1992 edition of WCW Power Hour, as Pillman teamed with “The Z-Man” Tom Zenk against Tracy Smothers (who might get his own week on Match of the Day soon) and Steve Armstrong, collectively known as the Young Pistols.
The match is absolutely a showcase for Pillman & Zenk’s offense, as they bump the Pistols around like pinballs almost the entire bout. But, the most entertaining part of the match is absolutely the Pistols’ stooging. Smothers became known later in his career as a master stooger, but man alive both guys were awesome being goofy little henchmen in this match. The match isn’t incredibly long, but it’s a perfectly energetic little TV match.

May 20, 2011 at 7:08 pm
I loved the fact that when he shot you into the ropes, he clapped his hands before hitting you with the back elbow…
If you are friends with me on Facebook, I pretty much dedicated my afternoon to Macho Man.
I don’t talk about wrestlers much anymore. Of course Flair 85-93 rules. WWF 86 got me into wrestling. Became a smark in 03 through the Tom Zenk rants, but honestly in terms pure entertainment… Move over Lex cuz Savage was the real total package.
From his look… The frizzy hair… awesome, aweosme sunglasses. The lavish robes…. The pink Macho Man t-shirt which I will be getting off of ebay now.
to the his work… Even the shitty Memphis stalling work, to the crisp WWF work to the horrible WCW work…
To his promos… Nonsensical and coked out as they were. I swear for about a year on youtube, I watched “The cream” promo, its fucking classic. He just keeps pulling out creamers. Puts one on Mean Gene’s head. Gene no-sells it and Macho keeps talking.
The “Freak out” promo, in his ICW days is another one. Watch that promo and tell me he doesnt look like Dr. Teeth from the muppets.
He wasn’t my favorite in the ring, He wasnt my favorie on the mic, he wasnt a box office draw, but when you put all of it together, he is definitely top 5 GOATs in my humble opinion. Truly in a class of his own.
There will never be another.
RIP
Posted by rasslinfan at 3:20 AM No comments:

Sunday, 8 May 2011
Everyday Is Like Tom Zenk: Z-Man & Brian Pillman vs Cactus Jack & Abdullah The Butcher (source)
So, I was watching WWE Vintage Collection, when all of a sudden up comes a Z-Man match. Seeing as how I've got 10 minutes to kill, and we've not had a Zenk update for a while, I thought it'd make sense to give it some attention. It's a simple enough story for a tag match: the faces are quick and full of energy, whilst the heels are brawlers who just want to hurt people. Z-Man fights out of the opposition corner early and takes over on Cactus with some nice high flying offence. He does get caught in an Abby nerve hold, which he then breaks out of before hitting a nice enzuigiri. Pillman is in and full of gusto, which is why I always like face teams who are smaller and more explosive, where the fans' excitement at the hot tag is matched by the fire of the incoming face. It's certainly the case here, with Pillman ripping into Abby, including hitting the Butcher with an impressive slam. Pillman slips on a springboard attempt and immediately starts selling knee, which was either planned or some very quick improvisation from him. Pillman bumps like a pinball for Abby, which makes some average offence look deadly. Z-Man comes back in and hits a nice pair of superkicks on the Butcher, which Abby sells with an ace glazed expression. Zenk locks on a sleeper, but the referee is distracted by Pillman brawling with Jack, which allows Cactus to hit Z-Man with the Butcher's staff for the win. Great formula tag match, it allowed both teams to look good and highlight their strengths.
Posted by rasslinfan at 3:14 AM No comments: 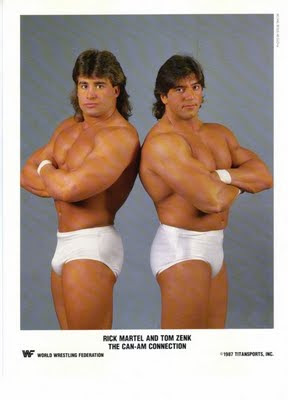 Posted by rasslinfan at 1:43 AM No comments:

Posted by rasslinfan at 1:05 AM No comments:

Posted by rasslinfan at 1:03 AM No comments: 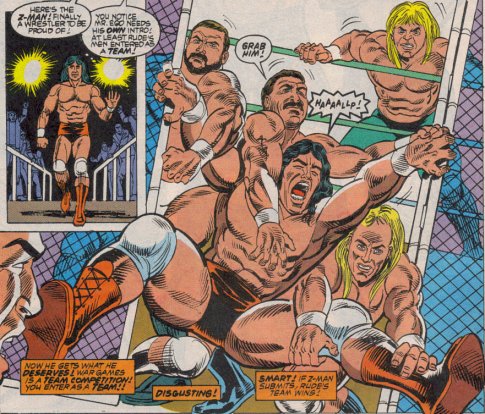 Posted by rasslinfan at 12:56 AM No comments:

Ghosts from Wrestling Past

Times were tough for the old WCW in the late-eighties, it seemed that most of the quality wrestlers left or were fired.
It was a real bitch to be a wrestling fan and Greensboro 's crowds started to drop off. I had gone to Baltimore one last time and watched first hand the destruction of the great Mid-Atlantic territory. This was the infamous show where Ric Flair left for the WWF and I watched a stunningly bad championship match with Lex Luger verses Barry Windom. This was a show that is still considered by most fans as the worst show ever and I was witness to a lot of fan hatred and a promotion who really didn't give a shit.
Security was really going nuts trying to locate and destroy all the negative signs in the crowd. Always remember that at the start of a show, the announcer would ask everyone to hold up their signs to 'see how creative they are.' All they wanted to do was steal your sign.
I snuck in a sign that said, "WE WANT FLAIR!" and hid it under Big Eddie. That sign really got the fans going when I stood on my chair and got the crowd chanting for the Nature Boy. I know this got over the noise sweetener because a lot of folks said they heard it on the pay for view.
There were two other memorable moments on this show. First, they had a lumberjack match and walking to ring side was P.N. News wearing a t-shirt and cut off pants. The guy looked like a wreak and as he stood there at ringside some guy yelled right into his face in an amazing Yankee accent and I quote, "NEWS, YOU FAT FUCK!"
News just stood there in his flip-flop shoes like the fat fuck that he was and I laughed my ass off.
Second, the next morning I witnessed at the bar Dusty Rhodes and David Crockett toasting and celebrating their freedom from Ric Flair. And I can tell you this, David Crockett looked at Dusty like he was his long lost girl friend with stars in his eyes. Which struck me as very creepy. These two guys were really happy that Flair was gone and it made me sick.
Note to readers, this is another reason why I hate Dusty Rhodes and you should too.
At the next Greensboro card I got this brainstorm. The main event was going to be a cage match with five on five. This match had sinker written all over it. So this is what happened. When all these guys walked to the ring, we put bags on our heads. Not just any bags but bags with the name of all the great talent that was gone from the promotion. These bags had the following names written on them. Flair, Blanchard Arn Anderson, Hawk, Animal, Jim Cornette, Stan Lane , Bobby Eaton, Steamboat, Buzz Sawyer and a few others I can't remember but you get the drift.
Then I held up a large sign that said, "GHOSTS FROM WRESTLING PAST!"
We then all began moaning like ghosts haunting the Coliseum.
I think I was under the Arn bag.
When Kevin Sullivan and Sting came out they totally lost it laughing. Sullivan just took a look and screamed laughing,
"That's Funny! That's Great!"
Then Tom Zenk walked over shook my hand and said, "Come on guys, Get Serious! This is wrestling!"..............
Posted by rasslinfan at 12:44 AM No comments:

By Canadian Bulldog, World Wrestling Insanity News
(Hollywood, CA) - An upcoming biography of World Wrestling Entertainment Chief Executive Officer Linda McMahon by famed tell-all novelist Kitty Kelley will "shock and surprise" people, according to anonymous sources.
"People see Linda McMahon on television and think she's this quiet, reserved, and slightly ugly, woman," said our source, whom we swear isn't Dr. Tom Pritchard. "But there's a whole other side to her that will come out in this book."
Among the dirt allegedly spilled in the book "Linda McMahon: Wrestling Whore" are the following claims:
However, proof of the book's existence thus far is slim. Apart from a book cover that we admit COULD have been photoshopped by the same jerks who do up phony "Return of Bret Hart" posters for the Survivor Series, there is no evidence the book has been published, green-lit, or even written.
(Unlike other wrestling-related books such as this one and this one, which we at World Wrestling Insanity News can proudly vouch for.)
And Kelley, who has previously written tell-alls on Jacqueline Kennedy Onassis, Elizabeth Taylor, Nancy Reagan and others, surprisingly did not return phone calls when contacted by a website about professional wrestling. This makes us just think that she's trying to keep the book launch a secret for now.
"Just wait till you get to know the real Linda," laughed our source. "She'll rue the day she forced herself on me, or my name's not Tom Pri… I mean… uh, Tom… Zenk."
-30-
Canadian Bulldog is a borderline journalist who writes weekly for World Wrestling Insanity and Online Onslaught and has published his own book of nutty e-mails to wrestlers. See his obscenely expensive Canadian BullBLOG for more details. He welcomes your comments at CanadianBulldog@worldwrestlinginsanity.com
Posted by rasslinfan at 12:39 AM No comments:

Big Daddy Cool lived up to his reputation and agreed to talk about any and all subjects from DX to the N.W.O. to the Death of WCW to Eric Bischoff to Oz to Tom Zenk and everywhere in between. You can hear the free show by clicking here - JG‘s Radio Free Insanity featuring Kevin Nash. You can also hear exclusive quotes from the 47 minute unedited shoot by going to the free information page of ClubWWI.com.
Posted by rasslinfan at 12:31 AM No comments:

The Honky Tonk Man on ClubWWI.com - 42 Minutes: The False Rumor About Him Started In Mick Foley's Book, The Former I.C. Champion Who Came Up With "Rhythm and Blues," Rowdy Roddy "PiperNutz," The Two People Still On His Ass-Whooping List, Pushing Elizabeth, The Person Who Came Up With The Vote of Confidence Campaign, The People Who Played Peggy Sue, Why He Left WCW, Rockabilly, Tom Zenk, Killer Kowalski, and More
Posted by rasslinfan at 12:27 AM No comments:

Posted by rasslinfan at 4:11 AM No comments: 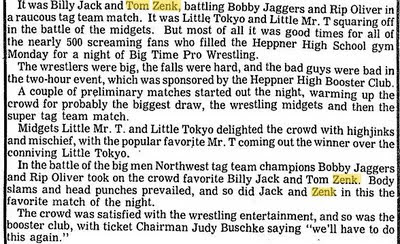 Posted by rasslinfan at 4:10 AM No comments: 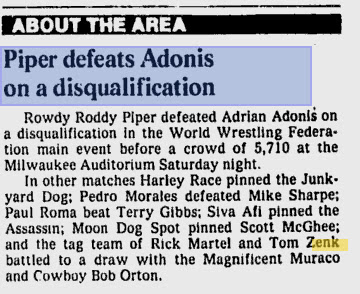 Posted by rasslinfan at 3:34 AM No comments: 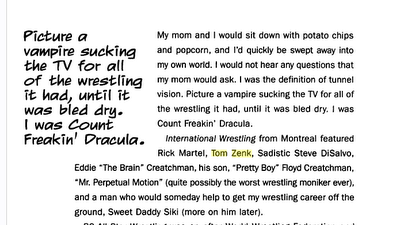 Posted by rasslinfan at 12:24 AM No comments: 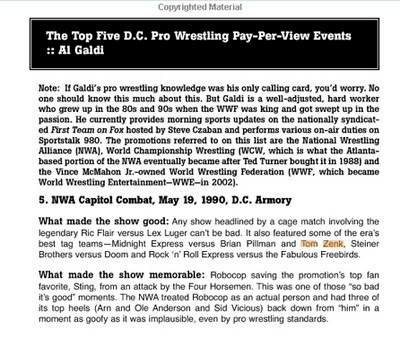 Posted by rasslinfan at 3:43 PM No comments: