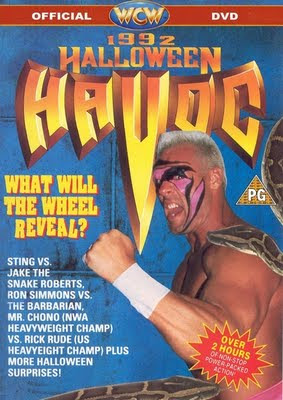 THREE SIDES TO EVERY STORY.....
ONE THE ONE HAND
- Opening match: Bobby Eaton, Arn Anderson & Michael Hayes v. Johnny Gunn , Tom Zenk & Shane Douglas. Gee, which side do you think the Philly crowd will cheer? The faces nearly get booed out of the building here, in case there was any doubt. The Pretty Boys clean house early. Zenk gets beat on for a while, then makes a hottish tag to Shane, and the heels cheat like nuts to regain the advantage. Jesse is in awe of the fans' reaction. Shane escapes a figure-four (oh, the irony) and makes the hot tag, and a pier-six erupts. Gunn (later to become Salvatore Sincere or Tom Brandi , depending on your view) hits the Thesz Press for the pin. Crowd does not approve. Good opener. **3/4

In all likelihood, this match will NOT make the tape, but I think it should, as it was one of the best matches of the night.  The fans popped BIG TIME  for the heel team and booed the faces.  This made Arn and Bobby work harder,  which is great as they are hard workers anyway.  They really played up the crowd and wrestled well.  However, the faces were scripted to win.  Gunn with the (ack!) Lou Thesz press.  **3/4

AND
HUGE crowd pops for all three heels (AA, BB, Mike Hayes) as well as Tom Zenk.
Jesse even mentioned it after I was grinning at the cheers for the heels.