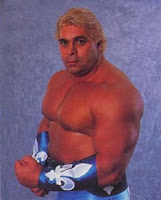 ".....Im glad you pointed that steroid thing out. In Fact Bravo Started using them only when he joined the WWF back in 1986-87 because McMahon wanted him to have bigger arms. And that's something that Bravo said on many occasions. When he was wrestling in Montreal in the early 80's, Bravo constantly gained some weight but always kept his awesome agility. He lost that agility the day he started using Steroids in the WWF. But if you go on youtube, you will see many of Bravo's old matches from montreal and you will see that Dino was not just a powerhouse and an agile wrestler. He also was a good scientific wrestler. And he was a teacher for the International Wrestling promotion School in  Montreal. And amongst his students was a wrestler by the name of Tom Zenk."
Posted by rasslinfan at 10:54 PM